Judgement of this case: Click Here!
IMMIGRATION — Exclusion and expulsion — Detention — Applicant was Egyptian national who came to Canada in 1995 — Applicant traveled on false Saudi Arabian passport and claimed refugee status, which was granted — Applicant became subject of interest to Canadian Security Intelligence Service — There was concern that applicant communicated with terrorists — As result of investigation, applicant became named person in certificate issued by respondent Ministers and he was arrested in 2000 — Certificate was determined to be reasonable — Applicant was eventually released from detention with very stringent conditions — After Supreme Court of Canada declared security certificate regime to be unconstitutional, new security regime came into force and new security certificate was signed by Ministers against applicant in 2008 — Applicant returned to detention after wife and stepson renounced role as sureties but he was again released from detention with conditions — On review of conditions in 2013, judge found that there was basis upon which to maintain that applicant posed threat to security of Canada but threat had significantly diminished so conditions of release were significantly relaxed — Conditions were designed to ensure that applicant did not communicate with terrorists — Applicant applied for release and to repeal of all conditions of release except for few minor conditions — Application dismissed — Imposing conditions of release must be weighed against intrusions into private life of individual — Court had to find right conditions that neutralized danger associated with person — Danger to security of Canada associated with applicant was not comparable to danger assessed in past — However, since 2013 review where it was found that threat had diminished significantly, there were no major indicators that it had further diminished — Danger to security of Canada associated with applicant had not evaporated but remained latent, perceptible and factual — 2013 conditions of release were working and neutralized danger that was assessed — Lifting all conditions did not guarantee that danger applicant posed would be appropriately neutralized — Given demanding travel required, instead of weekly in-person reporting applicant was to report in person twice per month — Condition relating to supervision of mail was no longer required — All other conditions remained — None of proposed questions for certification transcended interest of parties, related to issues of broad significance or general application and were not dis positive of appeal 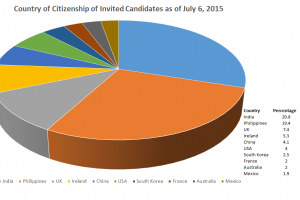 Country of Citizenship of Invited Candidates as of July 6,[...]